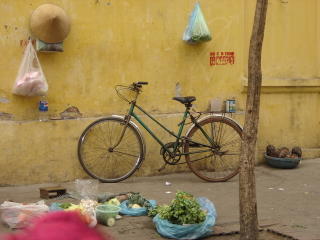 I went to the market and bought some chicken and some veggies. The lady said to me chicken is very expensive today because of bird flu from the south. I said, it should be cheaper now than before but she didn’t agree. I walked away but I heard some other girls saying that my accent was not local or that I was a Viet Kieu (people who live abroad). I went back to her shop and bought the chicken at her price and went to another shop to check the weight and it was out by almost 200 grams. I went back to her and told her about the missing 200 grams and she tried to argue the point. I pointed right at her face and said to her: “I’ve bought chicken from you before and you’ve tried to rip me off today and I’ve decided to buy from you again but I want to let everybody know that you are a rip off merchant.” Then I walked away. Every body laughed and I didn’t think I would do that. I was surprised at myself about that. I walked out of the market a little fearful and wondered if she was chasing me with a knife.

Anyway, I’ll never go back to her stall again. Isn’t that strange for a guy who never usually says a word, who normally just ignores and walks away?
Posted by Van Cong Tu at 11:41 PM

I love your blog, very funny and made me laugh. Great job, thanks.

Lolz that was great my friend. I love your story.

Hi all,
Thansk for dropping by and comments. I usually smile when I think of it.

I was teaching a children's class at the Vietnam National University and normally I don't yell at children, but this one kid kept flicking some bamboo in class and I snapped, yelled in his face, took his bookbag, and threw it out the classroom, even when I only had 3 minutes of class left to teach.