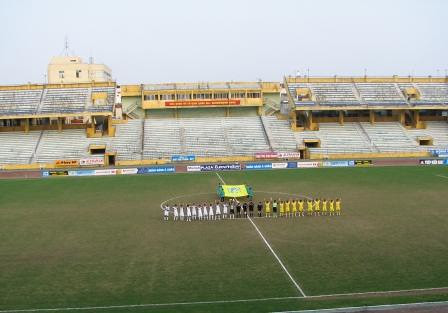 To support my city football team, I invited some of my friends to go to Hanoi stadium, San Hang Day, to watch Khanh Hoa last Sunday. We were looking forward to enjoying the game and drinking some beer but the funny thing is that they do not allow beer to be sold inside the stadium, which was a bit annoying because we had all brought beer stubby holders to keep it cool. I asked the lady who sold the drinks, and she said that because the fans used to get upset when the referee made a mistake or the opposition scored a goal and throw their beer cans onto the ground or at the players. There are football hooligans in Vietnam, too so the government banned the ladies from selling beer. It was a shame but we ate some bread, drank red bulls and waters plus some chips, peanuts and crackers. We ate a lot while we watched the football. 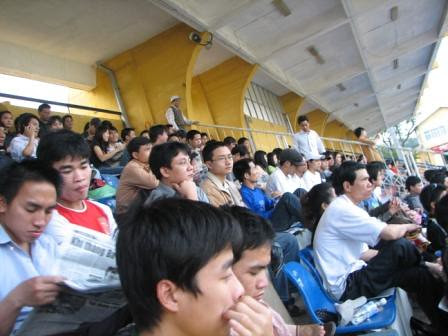 The match wasn't as excting as it should have been and I was so disappointed because my team lost. The atmosphere was great with people shouting, swearing non-stop and of course a few arguments as well. I was sitting near an old man who had verbal diarrhoea who was driving me nuts. 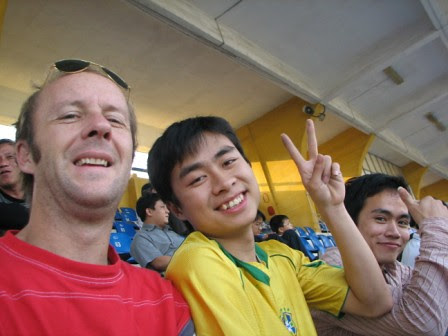 The tickets were much cheaper than I thought, from only 20,000Vnd to 30,000Vnd. If I remember correctly, in Nha Trang the tickets costs me about 50,000Vnd each. Maybe I am wrong. 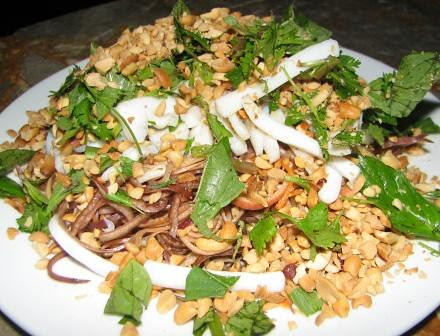 Finally, it was time for dinking beer when the match finished. We went to Bia Hai Xom for drinking and dinner. The food was good and beer cold-thank god.
Posted by Van Cong Tu at 8:59 AM

yummy looking food! Sorry didn't give you my email address before
it's heather@firstdiscoverieschildcare.com

Sounds fun! Here they serve the beer in plastic cups...no bottles/cans allowed either for the same reason.

Really cool blog. In my country people are soccer mad. The only problem is that they watch The FA and UEFA league on TV and no one goes to watch the local teams. So they struggle to survive and at the end of the day we suck in soccer

>>football hooligans
we have that too in the past. i guess they exists everywhere there is football.

Have you been following Lee Nguyen, a Vietnamese-American who is playing pro for a Dutch team?

I posted this earlier but I am not sure if it made it to the right spot. Again the site is great and I love it.

The reason we are looking for information is because my wife and I run a small wedding planning company in Vancouver Canada and we are working with a Canadian couple to help plan their wedding. The wedding will take place on January 2nd 2007 on the beaches of Nha Trang. They are planning on having 20 or 25 family members attending to celebrate their marriage.

I was hoping that you might be able to provide us with a little help and information. We have found it very difficult to find people that do photography, flowers, music and other things that happen at weddings. If you have time could we chat via email about these different services. We can be reached at info@lotusevents.ca. Any help or information you can provide would be wonderful. Thank you Rob Tucker

My husband is a big football fan. He's really looking forward to World Cup this year. We even planned our vacation so he would have time to watch WC games while in Canada.

Here, beer is sold at almost every event although it's quite expensive.

Hi,
I know it's wierd about not allow drinking beer but in some points it's right.
chanchow, Yes, I heard about him alot and wish him all the best.

You are confusing us readers from the US. In the states, we call this game soccer and football is played with an oblong shaped ball and requires contact - such as tackling!!! :)

thuy, americans are on the minority side here, lol. Almost all over the world they call soccer football ^^, and that makes more sense since they play with feet :p.

Im visiting HCMC/Hanoi from Melbourne soon and have been googling myself stupid trying to find a website in english that tells me how to buy tickets to any game in either Hanoi or HCMC. The www.vff.org.vn site is constantly down and I dont know how else to get hold of info on tickets like availability, a competition draw or prices/dates etc. Where does everyone buy tickets and can you get them online?

Hope you can help.

I like this blog, i think that it has useful information, good work.