Vietnam Airlines’ service for domestic flights is unbelievably bad at the check-in counter. I couldn’t believe that I had to stand in the queue for more than an hour, only to be informed that the plane had already taken off even though the staff already knew the plane was full, and there are lots of people still waiting for that flight. The problem is that there are heaps of staff wandering around but they don’t really know what they have to do. Many passengers realized that the staff were putting too many passengers on our plane which meant our seats were not available. Nguyen Manh Hung the supervisor argued with passengers and he said it was so strange to be in this situation. We all said what is strange here? We all had tickets and had been standing there for over an hour, and if the plane was full, the staff should have told us officially, but they didn’t do that. The way they explained it to us was that it was not their responsibility. What kind of service is that? 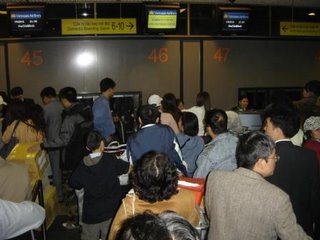 I have been traveling with different air lines and Viet Nam airlines always make me feel insecure. It seems that this is the treatment for cheap promotional airfares and for normal air fares as well.

Anyway, we had to take another later flight and that flight was delay for another two hours because of they had to wait for the connecting flight from Korea and it means we will arrived Ho Chi Minh City at 1.30am. I was so upset with this kind of situation even though, we all know passengers should be well treated because flying is expensive and in this situation, we were treated very poorly. I would think that, because this is the national airline that they would be more proud of the service. It’s no wonder that they always appear on the bottom of the survey of airlines. This is a shame for the national airlines which is supposed to represent the Vietnamese culture to the world. This problem needs to be solved.
Posted by Van Cong Tu at 8:46 PM

Unknown said...
This comment has been removed by a blog administrator.
7:56 AM

Hi Mr. Godknows, Happy New Year to you, and wish you all the best!!!
About the airline services in Vietnam, im really sorry you've had such a bad experience. Hope you will be luckier next time.
Im very optimist when it comes to this kind of problem. I believe Vietnam is trying the hardest to make things better each day. So, although it hasn't been a world class service yet, it is at least getting better and better. The next time you ride, you might have more satisfaction ;)
All the best,
-nxh

Oh dear, I would have been quite upset too! To arrive at 1:30am is incredibly inconvenient, and the airline should have at least been open & honest about the situation with the plane being overbooked. Bad service is rampant these days, you pay the high prices but don't necessarily get a garuntee that the service will match up to that. Anyway, Happy Lunar New Year!!!

Godknows: It’s not just Vietnam, airlines treat you like crap in every country. At least they let you keep your shoes on when you went through the line. I would be concerned about the aircraft, though – I think your country is still using some of the older Russian made aircraft…

Sorry to hear what you have gone thru. WHat a start for Tet.

May you and your family be blessed with good health

Sorry about that, but I'm not surprised to hear of your bad experience. Vietnam Airlines provides notoriously bad services. I used it both on domestic and international flights, so I know. Most of the time, the flight attendants are rude and badly trained and speak English with an accent so thick as to be incomprehensible. It's obvious the hostesses are hired for their looks, not their brains. If it makes you feel any better, the service on China Airlines is just as bad. If one looks at the terrific job done by Singapore Airlines or Thai Airways, it makes one wonder whether the management of Vietnam Airlines hasn't been recruited because of political/personal connection, rather than competence.

I tried VN airline (only national flight) before, and to be honest the service wasn't that great, it is not so bad. But I could imagin what you went through ;-). Unfortunately, not only the airline itself but the whole airport is a problem! Well, I did have a bad experience with Malaysia airline, and China Air isn't greater. And although many people believe that VN airline uses a lot of old aircrafs but it's not true, they recently bought a lot of new ones from Boeing...

Whatever, I never had any problem with VN airlines, and every times they were very friendly with me. Even when I missed 2 times my flight in a row.

4 years ago I forgot a music equipment with worth 2,000$ in Saigon airport. There was no name, address or telephone number wrote on it.
Once arrived in Hanoi, I just informed VN airlines who brought it back to Hanoi 5 days after!:O)

If you think that a VN airline is unprofessional, just try Air France and come back to me: it’s worse.

OMG, sorry to hear about that, anyway am glad you are safe & sound. whatever unpleasantness is all over. Enjoy your holidays!!!

I'm going a bit off topic here, I was just looking through your profile, and couldn't help wondering... why exactly do u lke pop, hip-hop and rap??

HI There! My ex husband is a pilot for VietNam AIrlines..hes an American. Anyway most of the airline industry is pretty bad right now....I do however feel your pain. I have been to VietNam twice...a very lovely country I also enjoy your blog and the recipies!!!

I have to agree that the service on Viet Nam Airlines is pretty bad. Supposedly, that is one reason why the government started up Pacific Airlines - as some competition to might wake up the flag carrier.

But problems such as you cite at the counter are cultural too. The culture in Viet Nam is to wait until your superior tells you what to do. It is not the norm to take charge and make decisions.

I recently flew from Da Nang to Singapore on new service from Tiger Airways. We chatted with a trainer who had been in Da Nang for a week training the new ground crews. She was amazed at the apathy of the new employees - they had no self-motivation.

Change can take place, but it will greatly impact the whole culture.

Yikes! Thanks for the warning.

Hi all,
Thanks for your comments. I dont know how long it will take for the changes.