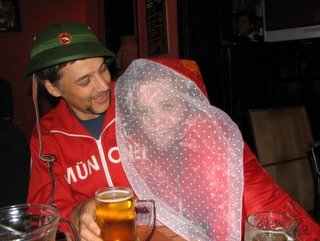 We started the afternoon by meeting up in front of Hanoi towers. A mixed group including one from Iran, four Aussies, one English, one Kiwi and me - Vietnamese with the Vietnamese soldier's hat on. Everyone on the street looked at us and smiled and thought it was funny. They possibly thought that we were strange or that we were doing some act for charity. We went to Hanoi Starbowl for a few games and beers, then down to the funny video arcade games. Most of us had never ever been bowling before and I had a sore thumb for a few hours afterwards. 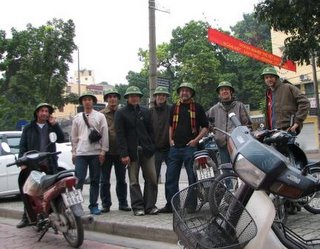 After bowling, we went to Highway4 for dinner and drank some plum wine which was strong but satisfying. We ordered heaps of food and everyone seemed to enjoy the meal after a couple of hours of bowling down the balls. 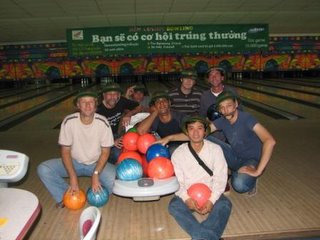 The next place on the itinerary was a very luxurious place, the Hanoi Hilton Opera hotel, where listened to a Spanish guy singing in Spanish of which we couldn't understood a word. He seemed very helpful, using the microphone to call the waitress for us - cheers mate! The problem for us was the bill, my goodness me, my eyes almost popped: seven beers, one big bottle of water-and the damage was 490,000Vnd. We consoled ourselves that we deserved it. 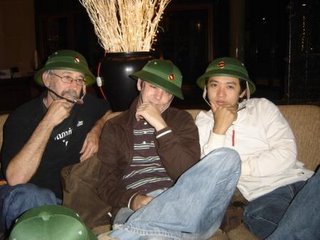 We left the luxury for the Bia Hoi called Lan Chin, had a couple of beers each with crackers, peanuts and the bill was like nothing compared to the other places. The beer is really good here, the staff very friendly.We tried to get into the Relax bar and Seventeen Saloon but we couldn't because of the fire drills going on that night. This was a nuisance because we wanted to make a surprise for Mark for his last free night. Anyway, we kept going to Le Pub for more beer and waited for the girl group (hens party) to join us. 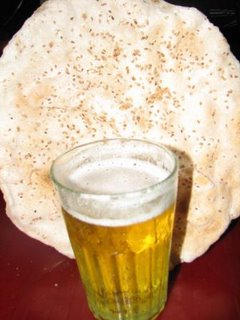 Finally, the girls arrived, a bit under the weather but dressed in very nice Ao Dai(traditional long dress). Kate - Mark's wife-to-be looked so gorgeous in Red even after much beer and happiness. 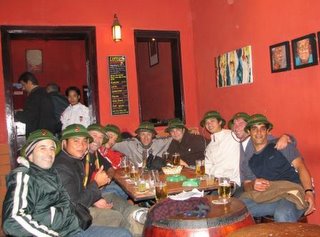 I went home at about 12.30 Am because I had to work early the next day, but all of them left there at 6am, probably a bit drunk. I don't know what went on after I left, but surely I know, they all had a good day. Mark and Kate will be a happy couple forever- Congratulations to you guys from the bottom of my heart.
Posted by Van Cong Tu at 7:45 AM

HI Tu
Thanks for keeping us informed on son Mark & Kates wayward movements. No wonder they don't answer our calls. I'll buy you a beer -Monday, but not at Hilton prices.. Thanks for a great Blog. Papa Cliff

Hi Cliff,
No worries, how about at the Metropole Sofitel?

That was an intering night.I never think that In one night you can enjoy many things. That's great

You have an extremely interesting blog! Your colourful pictures makes me want to visit Vietnam someday - perhaps that's exactly why you're in the tourism industry, eh.

Maybe I will someday...afterall, we're neighbours (I'm from Malaysia).

Thanks Tu for all the good wishes for us (and yes we had a great time that night!)

Hi Tu
A trip to Viet Nam was something my 18 year old son and I were considering. He died in May of this year. Maybe someday I will make the trip without him but I'll deeply miss his open mind. Aaron would have been fond of your culture.
Peace
Tom

Hi Tom,
Sorry about your son, I am sure he would be happy if you make the trip to Viet Nam. Thanks for your such a special comment.
Rubicund Y. Logorrhea : thanks