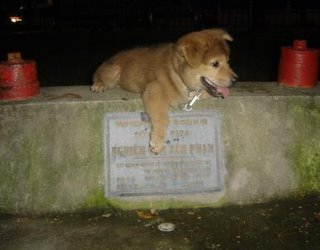 We bought Misa almost four months ago and can't believehow much he has grown. He's such a cute nice dog. All my friends love him. I usually bring food from Wild Rice for him, which means he's eating five star food most nights. My colleagues at work always kid that he eats better food than most people, and no wonder he is so intelligent and big. 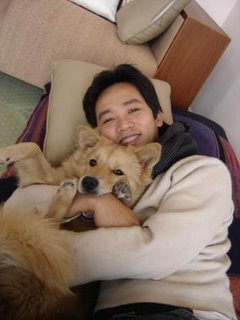 He loves going out by motorbike, standing on the front like he's driving or by taxi. He always tries to sit on the sofa as he thinks he's a human being. Misa also enjoys having showers and playing in the park or walking down the road. He knows when we return home and he's usually looking down from the roof to get our attention. We love Misa even though he pisses in the wrong place sometimes.
Posted by Van Cong Tu at 8:08 PM

hi!
How are you?
I found your blog at the Bogs of Note and I had already done one for me.
Wow, your place it´s so differente than mine and so interesting.

This blog is really great.I'm waiting each day to read the new articles. After reading this, Vietnam seems very similar to Kerala,India considering the greenary and food. Good work buddy.

Awwww...so cute!! By the way, I am leaving for Hanoi on Monday, can you believe it? Finally, after all my whining and dreaming! We have to meet up...I will probably come to eat at la lua and ask "Hey, where's Vietnamese God!?"

Your doggiee is soo cute. He actually looked a little like chowchow when he was little.

Hi Tu,
Misa sounds naughty, obviously needs toilet training. I hope you give him lots of walks, so he has the chance to "piddle" on other trees.
Is he a wedding guest?

Hi, I am very well but it's very cold(to the bone)in Hanoi, glad to see heaps of comments to keep me warm hehe.
Preya, Can't realy wait to see you back in Hanoi, see you at Wildrice.
Cliff, I am not sure if Misa has been invited yet but I can organize a preivate meeting for you haha. How about that?
Cheers all

It's hell housebreaking a dog, and it took my doggys 6mos or more to learn not to go pee-pee indoors! Your dog is just too cute btw!

Hi.
Im in your blog, i am here because your nickname "vietnamese God" caught my attention. Why vietnamese God?
It´s good be here reading and trying to understand haha, because I speak spanish, and i am not pretty good with my english... but i´ll continue trying.
You´re welcome in my blog, it would be nice read your commentaries, so, I hope you can understand a little bit of spanish! ;)
I can try, you can try... what do you think about that?
See you soon! by the way, nice photos!
"Saludos"
Cosette

He soooooo cute you puppy , love him so much :) I had one whose name is Misa and he liked going out by motorbike too .

Is he in Hanoi with you ?

Hi,
Anonymous, yes he is living with me in Hanoi.
Crystal, thanks fo coming back and encourage me by youe comments.
Tu