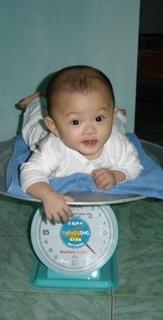 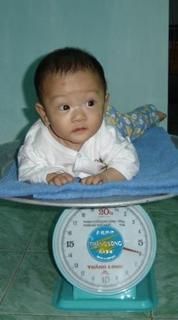 Minh, my sister works as a chef at a big government hotel in Nha Trang. She starts her work day at 5 am and finishes at 10 or 11pm in the high season, when there are lots of wedding bookings. She's a really friendly lady, speaks just a little bit of English but she loves to try to make conversation whenever we talk together face to face or via the telephone. 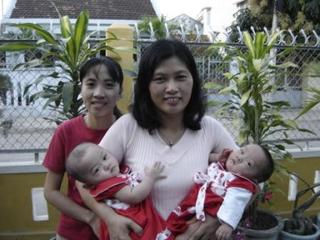 Minh and her husband, Thuc, have been trying to have a baby since 1985, which means it's 20 years next month. Finally, the gods have seen how hard they've been trying and have smiled on them and she has had two girls by invitrofertilisation(IVF) which cost them millions of dong. 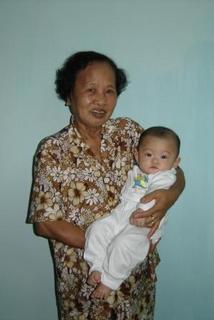 One of the girls, who weighed only 1.5 kgs, almost died when Minh gave birth one and a half months prematurely. The other girl was a bit better, but only 1.9 kg. After one year and a month, they are now 7 kg and 9 kg respectively. My family's really happy about this situation. Thuc still can't believe that he has two daughters and that they are so beautiful. He jumped up and down in the hospital when he heard that he had two girls. He said he appreciated everyone who had been helping them, especially my mother, who supported them through good times and bad.

"The babies are so gorgeous now and they can run around the house and have started to say ba ba, which means Papa," my Mum said. She's so happy to see my sister's family laughing and the babies' voices.

Looking at Minh and Thuc when I was there at Tet, seeing them play with the kids gave me a really strange feeling that I don't know how to explain. I wish my sister's family happiness forever with lots of joy and laughter.

That really is a miracle. Love your mix of posts: family, life in Hanoi, food and restaurants. Keep it up - it makes great reading!

Happiness and good fortune on the delivery of the two miracles.
Lee

Wow Tu, that is a beautiful story and your sister looks very very happy.