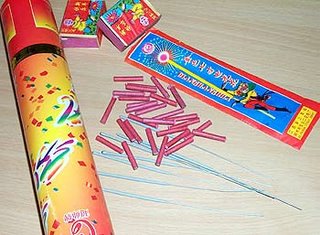 New year in Asia called Chinese new year, Tet in Vietnam. Fire crackers used to be one of the most important items that every family needed to have to celebrate until about 10 years ago.

Nowadays, due to numerous accidents which killed many people, the government has banned their use. Fire crackers can damage your body when they explode. Some people make firecrackers themselves at home using paper and powder bought from the market. I actually made a huge one at home when I was young and I was really scared when I heard the noise, but it's very exciting. 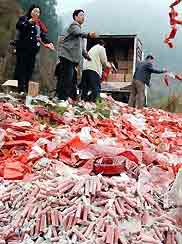 With Tet coming, people are trading in fire crackers from China in an illegal ways by hiring people to carry them over the border or by boat along the river. Students are the main target customers. The police have stopped many people and confiscated thousands of tons of crakers but there is another million tons of crackers being sold in Hanoi and around Viet Nam. The noise is happening throughout the day, almost every day. 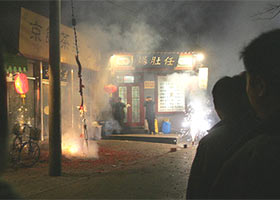 There are many stories of little boys throwing something into the middle of street, waiting for the bang, then running away down the alley and of course noone knows who did it. The victim is left on the street and needs to be taken to the hospital if it's serious. Even if not, he or she has to spend money to repair their motorbike and buy medicine for the injury. There have been hundreds of people who have lost their arms, eyes and some other parts of their body through playing with fire crackers.

This needs to be stopped because it affects innocent people walking around or driving on the streets.

Over here, firecrackers and fireworks were tradition to welcome the New Year. But now it seems it isn't so anymore. Some for safety reasons, others for financial reasons because they can really be expensive.
Just dropping to say hello after a long time.

cripes! Here it's not so bad, the only things on the streets on New Years are drunken people and empty bottles

I reckon there's nothing wrong with using firecrackers to usher in the New Year but their sale and the venues where they are used should be strictly regulated to prevent uncalled tragedies from happening.

thanks guys for your comments and Happy Tet

Here it's not so much a safety issue but an annoyance. People set off fireworks the weeks before AND after not only (secular) New Year but July 4th too.

I wrote an anti-fireworks editorial and my local newspaper published it!

unfortunately, fire crackers are banned in Singapore for almost 20- 30 yrs now? i miss those fun days..

Personally, I think the ban on firecrackers and fireworks should be lifted on new year eve. Tet doesn't seem exciting without this tradition.
But I am also aware of the fact that some people, especially kids, are so irresponsible that they cause those accidents. Maybe better discipline will help.

It won't truly have success, I believe so.

You are right, this stuff is so dangerous, only reckless people buy fireworks.

I think its a shame to ban firecrackers... its like fireworks in the uk during Nov 5th celebrations.. without fireworks it would be nothing. Better to run educational ads to encourage safe use and show the serious effects of throwing them at people. This has been very effective in the uk for creating safe firework usage. No need to ban them.